The story of My SP

A look at the design and development process of the My SP app.

My SP was the first ever app I published on to an app store. I started work on the app around August 2013 while I was a student at Singapore Polytechnic. 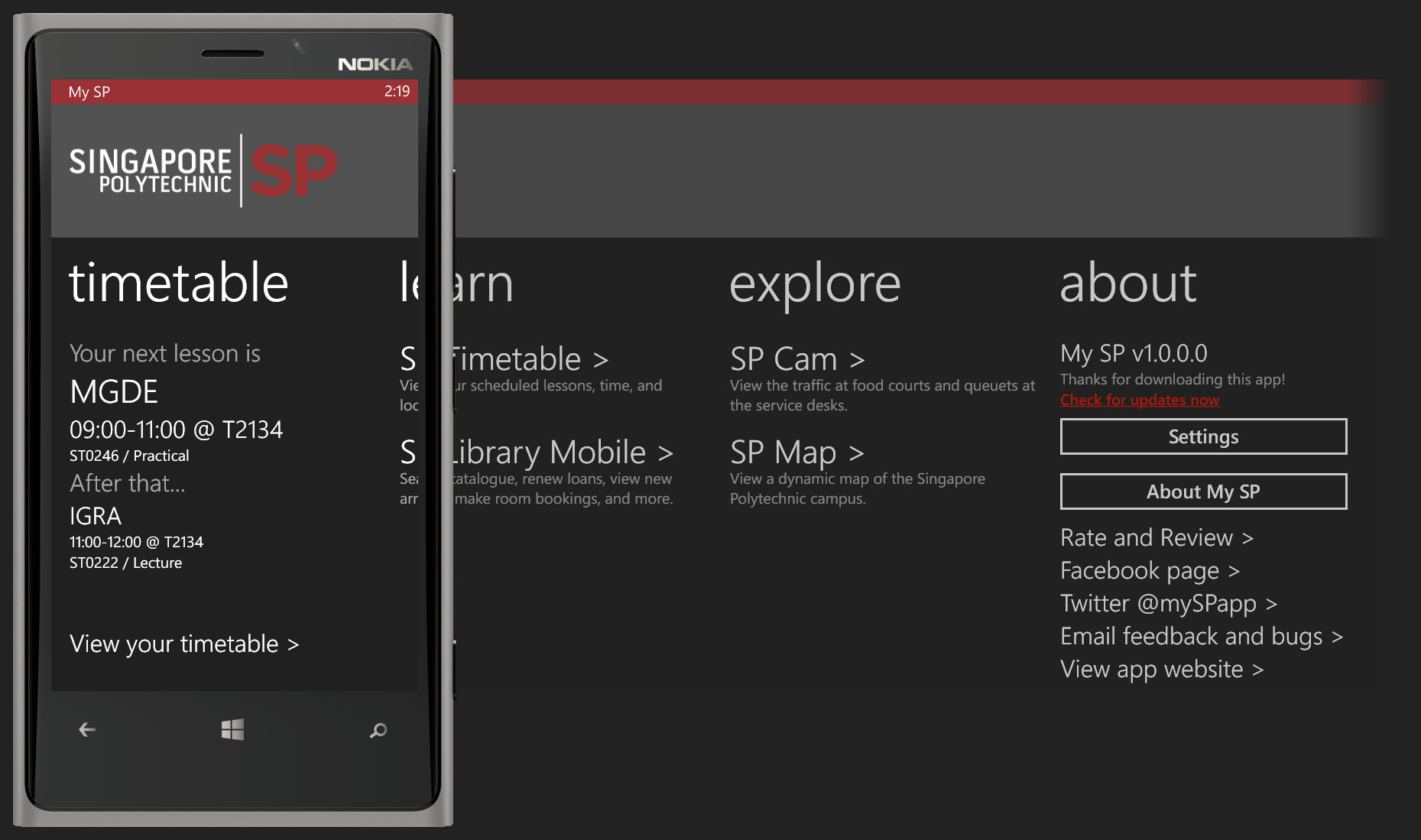 At the time, I was using a Nokia Lumia 820 (which ran Windows Phone). Without an official SP Mobile app, my options for checking my timetable were either to try to navigate the student portal on a phone, or to use screenshots of the timetable.

The first step was to work out if it’s even possible to retrieve timetable and other data with a third-party app.

To find out how to retrieve timetable data, I installed the official SP Mobile app on an Android phone, with network traffic passed through Fiddler. I soon realised that the official app in 2013 sent basic GET requests for timetable data. This was the same for images (such as those used by SP Cam), but that’s to be expected.

This has since changed in later years – the SP Mobile app now requires a login with student ID and password. However, the original endpoint I found continues to work.

SP Mobile has a module-based navigation system, where the main landing page of the app contains a grid of icons, with each icon opening individual modules (such as Timetable, SP Cam, or Campus Map). Here’s a link to Android Play, with screenshots.

Since the primary purpose of the My SP app is to provide timetable access, I opted to display the next two lessons above-the-fold, right on the main page. This eliminates time spent drilling down into the timetable module on the official SP Mobile app.

Here’s how the design of the app changed as it was developed:

Although I quickly published the app and followed up with a few bug fix releases, there were still some features that never made it. Live tile support wasn’t added; I didn’t manage to implement offline mode which displayed cached data; and finally the app was bodged together with some rather sloppy code.

That said, I did manage to ship a working app. If I had worried about rewriting the code and structuring it better (as I almost did), it would have been likely that I would have abandoned this project before it was complete.

There won’t be any further updates to the app. No longer being a student meant that maintaining the app was hard without being able to test it out myself.

The app will continue to remain available on the store as long as:

I’ll remove the app the moment it stops working.